Can emotional intelligence be taught? Marc Brackett, director of the Yale Center for Emotional Intelligence, thinks so.

Brackett and his team study how people of all ages can understand and regulate their emotions. They’re particularly focused on schools and on helping students, teachers, and parents get smarter about their emotions.1

Labeling an emotion helps us regulate it

One of the most interesting insights from his and others’ research is that young children benefit greatly from the L part of RULER: Labeling.

I remember one of my own daughters was prone to fits of frustration and rage when she was about four. She’d yell and scream and throw things and sometimes thrash about it in a way that broke my heart. I so wanted to help her calm down, but I didn’t know how.

Knowing what I know now, I would have helped her label her feelings. John Medina, the author of Brain Rules and Brain Rules for Baby, was clever enough to do this with his own son, whom he describes as being easily able to conjure up “Richter-scale” tantrums.

One day, as he was subsiding from a particularly fierce temblor, I looked at him squarely and said, “You know, son. We have a word for this feeling. I would like to tell you that word. Is that OK?” He nodded, still crying. “It is called being ‘frustrated.’ You are feeling frustrated. Can you say ‘frustrated’? He suddenly looked at me as if he had been hit by a train. “Frustrated! I am FRUSTRATED!!” Still sobbing, he grabbed my leg, holding on for dear life. “Frustrated! Frustrated! Frustrated!” he kept repeating, as if the words were some kind of harness tossed to him from a first responder. He quickly calmed down.2

“There they were, just as the research literature said: the powerful calming neurological effects of learning to verbalize one’s feelings,” Medina concludes.

You can use labeling in a crisis when your child needs help calming down. You can also use it proactively to help your child build emotional vocabulary and resiliency before all hell breaks loose.

Do This One Thing

The next time your child is angry or frustrated, label it. Rage? Fear? Joy? All are worth labeling!

To help with labeling emotions, Bracket and his colleagues have created a grid called the Mood Meter. The full-fledged version charts 100 different emotions that have varying levels of pleasantness and energy. You can get started with your preschooler using a simplified version of the Mood Meter:3 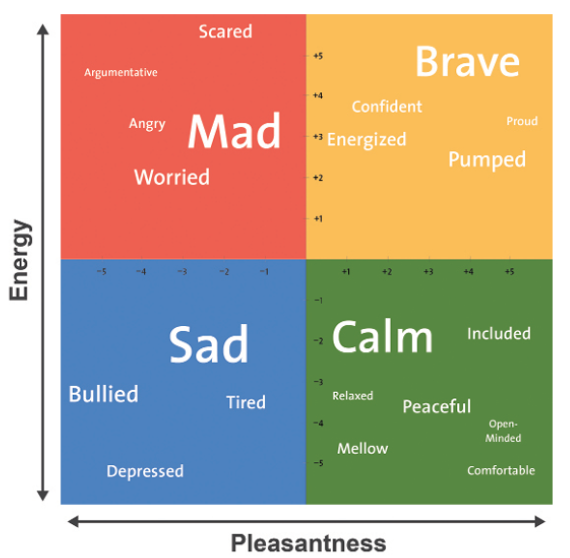 Talk to your child about names of other emotions, such as “frustrated” and try to put them in the correct part of the diagram. You might ask your child to act out the emotion.

If your child wants more, you can carry this a step further. GreatSchools, an education website, has worked with the Yale Center for Emotional Intelligence to develop simple worksheet versions of the Mood Meter geared to children from preschool through fifth grade. It can give the two of you an opportunity to label and discuss emotions more deeply.

One thought on “Name That Emotion!”